Death after sex on mephedrone intoxication

Of the new psychoactive substances, mephedrone has been gaining popularity lately, especially among clubbers and people who practice «chemsex». The «chemsex phenomenon» has attracted a great deal of media and political attention around the world. The use of drugs for sex has already been documented over the past decades. Generally, psychoactive substances have been used in most cases to increase sexual pleasure, activity, increase sexual confidence and improve the perceived quality of sex on mephedrone. The phenomenon initially emerged in the United Kingdom and Western Europe among lesbian, gay, bisexual, transgender (LGBT) population and it refers to the use of crystallized methamphetamine, mephedrone, γ-hydroxybutyrate (GHB) and, to a lesser extent, drugs of abuse like cocaine and ketamine to facilitate sex, frequently in a polydruguse combinations. In this publication, we present a detailed documented case of acute toxicity associated with the use of mephedrone prior to sexual intercourse.

A 56 years old man was found dead in his flat, only wearing a sex belt with a harness around the waist; no evidence of violence was observed. Based on the statement of the deceased’s friend who was with him, the deceased decided to dilute the chemical substance in physiological water while having sex in order to give himself and his friend an intramuscular injection. A few minutes after the injection, the man lost consciousness and hit his head. After the paramedics arrived, they performed a death certificate. At the scene, police found insulin syringes, several ziplocs with white powder inside, and two glass vials with a 10 ml solution.

The deceased was an Italian male, 177 cm in height and 85 kg in weight; the corpse was in good condition, the body appeared well nourished. No external injuries or other remarkable evidences were found, except for a needle puncture mark and a contused lacerated wound on the left side of his upper face area and an abrasion in the zygomatic region, both most likely due to the fall. These findings were both superficial and were deemed not meaningful for the cause of the death. The internal examination of the body did not reveal any organ abnormalities that could explain the exitus. From autopsy examination performed after 38 h, oedematous facies, widespread polyvisceral oedema and congestion, interfissural pulmonary petechiae, a moderate aortocoronary sclerosis and cardiac hypertrophy were detected; heart was 560 g. During autopsy examination, urine, bile and blood samples (central and femoral venous blood) were collected and stored at −20 °C temperature until toxicological analysis. Due to the sudden death and the availability of many other biological samples, hair collection was not deemed necessary by the coroner.

During histological examination of the organs we obtained the following data:

We performed toxicological analysis of urine, bile, and blood samples according to standard protocol using liquid-liquid extraction and GC-MS and HPLC/MS-MS. As a result of the study, mephedrone was detected in the following concentrations: 2.0 mg/L in urine sample, 1.1 mg/L in bile and 1.0 mg/L in central blood sample while 0.8 mg/L in peripheral blood samples (Figure 1). None of the other most common drugs of abuse, in particular mephedrone’s isomer 3-MMC, could be detected neither in GC–MS or HPLC/ MS-MS analyses by retention time and SRM transitions.

In our report, the toxicological data obtained suggest that the deceased had consumed the substance before his death (almost a few minutes before it occurred). This fact is confirmed by the presence of mephedrone in the bile, as well as by the high concentration of the substance in the blood (which has not yet had time to metabolize). Unfortunately, it is not possible to identify the exact amount of mephedrone used in our case. Taking into account tolerance phenomena and inter-individual variability, however these concentrations seem to be comparable to those already reported in literature and therefore the sudden death could be linked to the toxicity of the substance. In the present case, with particular reference to mephedrone peripheral blood concentration, the compound concentration was slightly lower than in the cases previously reported, where no other drugs were found to play a role in the intoxication. On the other hand, the mephedrone central blood concentration determined is higher than in the reported non-fatal mephedrone intoxications, suggesting a post-mortem redistribution based on the ratio between the central and peripheral concentrations (C/ P = 1.25).

Based on previously published articles, mephedrone-like psychoactive substances cause dose-dependent hypertension and tachycardia due to increased adrenergic stimulation. One of the most frequent histopathological pictures of such pathophysiological syndrome is focal necrosis of myocytes as well as contractile bands (what we observed in our case study).

Objective and local assessment, as well as screening to identify major drugs in blood and urine, classified the death in our case as mephedrone-related. In addition, a subject with cardiac hypertrophy and moderate aortocoronary sclerosis could have experienced the effects of peripheral vasoconstriction with increased pressure, which could have led to acute cardiac decompensation. Cardiac damage, in our case, was confirmed by the presence of contraction bands and microhemorrhages, and acute hypertension was verified by microhemorrhagic foci in the white matter of the brain. Facies edematosa, oedema and polyvisceral congestion, interstitial petechiae findings are compatible elements with death from acute cardio-respiratory failure, with peri-mortem agony of a few minutes in which the cardiac hypertrophy, the moderate aortocoronary sclerosis and mephedrone injection have played a substantial role in the evaluation of the sudden death cause. 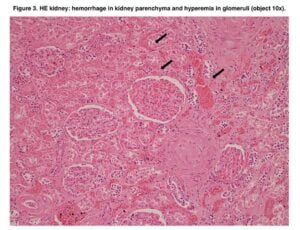 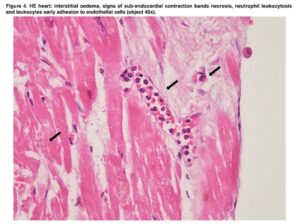 In the case we described, the investigative service correctly and efficiently used all the data to identify the correct cause of death. Pharmacodynamic and pharmacokinetic studies of mephedrone (and cathinones) are ongoing and certainly require more thorough investigation, especially in cases of acute intoxication. Unfortunately, to date, there are sporadic publications of cases of acute toxicity of mephedrone, which is a great shortcoming of the scientific community that deals with the study of narcotic substances. The case we have published highlights the importance of presenting histopathological changes in the body in relation to the full interpretation of death data.

Join the discussion and tell us your opinion.