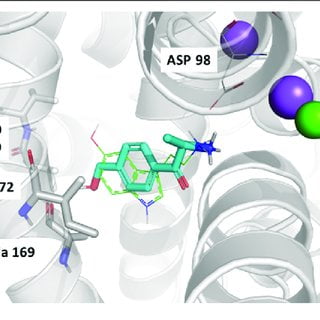 The chemical structure of cathinones was described as far back as 1929, but the first reports of its recreational use as a new member of the family of psychoactive substances, appeared only in 2007. At the same time, mephedrone’s metabolites were studied even later. Mostly, mephedrone interacts with the transporters dopamine, norepinephrine, and serotonin (transporters DAT, NET, and SERT). The aforementioned transporters are membrane proteins involved in the starting and reuptake of the relevant neurotransmitters, which then return to the presynaptic after release, limiting neurotransmitter diffusion.

It is known that synthetic cathinones have a chiral center, which contributes to the presence of two stereoisomers, which are often characterized by different pharmacodynamics and, as a result, different clinical effects. While both the R- and S-enantiomers of mephedrone are releasers at DAT and NET with similar potency, S-mephedrone is a releaser of SERT with 40 times higher potency than R-mephedrone. Mephedrone has been shown to be metabolized through three main hepatic mechanisms involving the cytochrome P450 2D6: 1) N-demethylation, 2) hydroxylation, 3) reduction of the β–keto-group. Given that mephedrone undergoes specifically stereospecific metabolism, it is necessary to study the enantiomers of specific mephedrone metabolites in order to identify its stereoselective pharmacology. In this publication, we describe the results of a study in which other potential mephedrone metabolites were synthesized in enantiomeric pure form; the stereopharmacology of the resulting metabolites on dopamine, noradrenaline, and serotonin transporters was examined; quantitative structure-activity ratios were examined; and human body fluid was analyzed for these stereoisomers.

The main objective of this study was to determine the pharmacological enantiomeric selectivity against the different metabolites (first phase) of mephedrone and to examine the structure-activity relationship and overall pharmacological significance. According to recent studies, increasing the mass of the para-substituent increases the activity in SERT transporters. However, we later found that the introduction of HO-CH2 reduces this activity, which underlines the difficulty of rationally constructing drugs with specific activity on transporters. Also, in our study, we found that the reduction of the β-keto group to the β-hydroxyl group introduces an additional stereocenter that provides stereoselectivity with respect to DAT/NET.

The data obtained show that hydroxylation and carbonyl reduction render mephedrone metabolites inactive, which is consistent with the classical role of hepatic biotransformation reactions of xenobiotics. In addition, modifications of cathinone structures can result in the formation of various hybrid compounds that are substrates for any of the proposed transporters. Therefore, we investigated the effect of metabolism on the substrate or blocker profile of these obtained compounds. In the recent past, transporter-mediated currents have often been used to study monoamine transporters because they are an important tool for obtaining data on pharmacodynamics without the need to synthesize radiolabeled isotope compounds. Given the relatively large number of compounds tested in this study and the focus on the effect of metabolism on mephedrone moiety, we did not extrapolate dose-response curves and therefore we cannot conclude if metabolism convert the full-releaser mephedrone in a partial substrate.

All of the metabolites we tested for transporter-mediated currents had an IC50 < 30μM, which is a major argument that the lack of DAT current for high-affinity metabolites is related to their activity as DAT blockers. Next, we performed relative calculations of IC50 changes for DAT/SERT and metabolite-induced currents. As a result of this study of the effect of metabolism on the substrate and blocker profile of the putative metabolites, we saw that whereas in SERT the loss of affinity and transport efficiency correlate linearly, in DAT similar changes in currents have no correlation with changes in affinity. The findings suggest that, for the most part, mephedrone metabolism affects the substrate profile on DAT, while on SERT it just reduces their affinity. Metabolites formed from mephedrone that cannot be transported by DAT cannot interact with the intracellular compartment, reducing monoamine depletion (just as in the case of various amphetamine derivatives).

According to our data, there is a lack of current in SERT due to the disruption of the interaction between the metabolites and their target. The reduction of cathinone β-ketone to an OH- group and the R,R-configuration of the resulting metabolites drastically impairs the affinity at hSERT. Especially, we found that the 4-CH2OH analogs are considerably less active than the respective 4-CH3 derivatives and that this is possibly due to the placement of the hydroxyl group into the hydrophobic subpocket B, described as playing a major role in substrate specificity. However, we could not provide a binding model for the different enantiomers because the docking procedures did not detect differences in the positions between the enantiomers.

Although the metabolite analysis performed provides sufficient information on the structure-activity relationship, the direct validity of our data is directly dependent on the presence of such chemical structures in people who use mephedrone. Thus, the presence of suspected similar metabolites in pure chemical form allows us to look for their presence in the biological fluid (in our case, urine). When imaging the stereoselective metabolism of mephedrone, we were able to detect 4-OH-MMC, 4-MC, 4COOH-MC and both the anti- and the syn-dihydro-4-MC. Moreover, we could not detect dihydro-4-MMC in the urine sample, which is a rather interesting fact that requires a detailed study. While in the case of dihydro-4-MMC found in our previous study the syn:anti ratio was approximately 2:1, the dihydro- 4-MC detected here is present in 1:1 syn:anti ratio suggesting that the stereoselective nature of the metabolic process may vary across different metabolites and/or across different subjects.

Our study identified, among others, conjugated mephedrone metabolites: succinyl, adipyl and glutaryl conjugates of 4-MC, as well as 4-MC carboxylated on position 3′ and 4-COOH analogs of 4-MC, dihydro-4-MC and dihydro-4-MMC. In a study conducted by Linhart, the metabolite 4-OH-MC was found and the authors reported that its content could range from 0.1% to 0.2%, although no such metabolite was found in our study. In the initial stages of the study of this problem, this low metabolite content can be explained by interspecies differences, since 4-OH-MC is almost always identified in the urine of rats. Despite this, a comparative study of CYP enzymes in different mammalian species showed that the 2E1 form (the main enzyme responsible for mephedrone metabolism) showed no significant differences between species. However, other isoforms (CYP-1A, -2C, -2D and -3-A) show interspecies differences (including expression, organ specificity and catalytic activity).

Olesti studies have described plasma concentrations of mephedrone ranging from 16 to 222 ng h/ml, with this figure depending on various factors, including CYP2D6 polymorphism. Quantification of nor-mephedrone in plasma was about 25% of mephedrone directly and dihydro-mephedrone up to 10%. Given these data, we can assume that the probability of the effect of such metabolites (with an IC50 value of about 10 uM) on the CNS is extremely low. However, 1) they might still be involved in peripheric effects, or 2) they might still act centrally if generated locally in the CNS. CYP’s are not exclusively expressed in the liver; various CYP isoforms have been detected in the nervous system.

Overall, the data that were obtained in our study provide a clear model of the complexity of mephedrone metabolism. The indicated map in Figure 7 demonstrates that while N-demethylation and the reduction of mephedrone produce metabolites with full or reduced activity on monoamine transporters, benzyl oxidation very rapidly produces 4-COOH-MC, which is inactive against dopamine, serotonin, and noradrenaline transporters. The development of structure-activity relationships for monoamine transporter can provide important information for the development of future medications. Discovering innovative pharmacological tools to effectively modulate their functions may help in developing new medications for treating different medical conditions. Given our findings, we conclude that there is a need to develop pharmacological agents that shift the metabolism of mephedrone toward benzyl oxidation, which may ultimately lead to a drug to treat acute mephedrone intoxication.