Psychiatric characteristics of people who use mephedrone 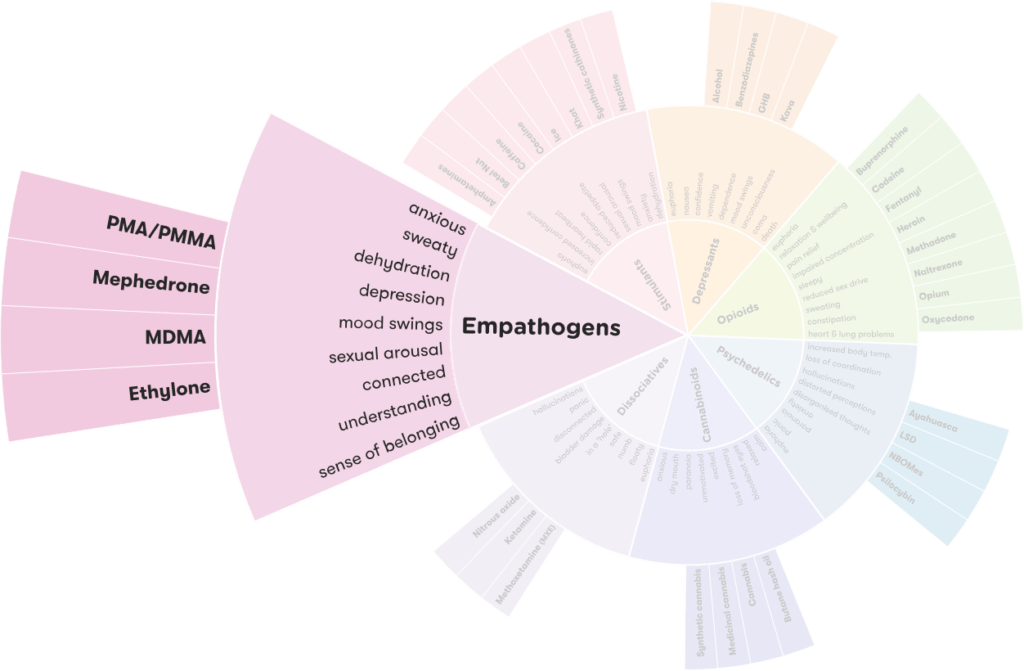 Beginning in 2016, The Lancet began to publish numerous articles focusing on the large increase in mephedrone use, as well as the deaths associated with it. The skyrocketing number of fatal poisonings, as well as persistent addiction symptoms and psychiatric disorders associated with long-term mephedrone use, indicate that it is an extremely life-threatening substance for users. This situation is even more serious when mephedrone is combined with other psychoactive substances. The most common side effects of mephedrone include: excessive sweating, headaches and dizziness, concentration disorders, lockjaw, increased blood pressure, tachycardia, cold waves, mydriasis, nystagmus, nasal pain and bleeding, memory and consciousness disorders, hallucinations, delusions, hyperactivity and skin changes. Higher doses of mephedrone may cause depression syndromes, persecutory delusions, ideas and delusions of reference, hallucinatory sensations, hallucinations, anxiety, aggressive behaviors and insomnia.

The immediate addictive potential of mephedrone is related to the fact that initially there is a rapid increase in dopamine levels (predominantly in the frontal lobe), followed by a rapid and dramatic decrease in levels. The addictive potential of mephedrone is most often compared to that of cocaine. People taking mephedrone nasally are more likely to admit that mephedrone is more addictive and carries more health risks than cocaine compared to people taking mephedrone orally. Evidence regarding the effects of mephedrone suggests that its consumption is associated with the ‘desire to take more’. As a rule, only long-term and frequent discrete use of mephedrone leads to the development of withdrawal syndrome and mental dependence, and tolerance to it may occur after the first act of use. The results of some studies show that mephedrone can have a greater addiction potential than MDMA, leading to another relapse and compulsive use.

An intolerant craving for repeated mephedrone use most often occurs after the first act of use, and alcohol can intensify the craving several times over. One clinical observation of mephedrone addiction shows that mephedrone addiction leads to other psychotic symptoms. In a study by the German Center for Mental Health, it was found that about 30% of mephedrone users absolutely meet the criteria of the Diagnostic and Statistical Manual of Mental Disorders. In sporadic sources you can find information that after long-term daily use of mephedrone people experience the most severe withdrawal symptoms: excessive agitation, strong skeletal muscle tone, etc., which makes people use mephedrone not for pleasure, but to relieve withdrawal symptoms. Given that there are still no data on the mental characteristics of people who use mephedrone, it seems very important to conduct research on this problem. This publication examines groups of patients who were hospitalized between 2010 and 2018 because of regular mephedrone use.

Contents hide
1 How was the analysis conducted
2 Discussion of the results
3 Summing up and conclusions
3.1 Related articles

How was the analysis conducted

We took information from the archives of a psychiatric clinic between August 2010 and April 2018, with a total of 601 people analyzed. The criterion for mephedrone binge drinking was the fact of using mephedrone for at least two consecutive days. Exclusion criteria were patients with concomitant psychiatric disorders (anxiety disorder, depression, schizophrenia, and so on). For the purity of the study, we conducted a qualitative urinalysis, and only those volunteers whose urine identified only mephedrone or its metabolites were allowed to participate. The following variables were collected from the medical records of psychiatric patients: substances taken with mephedrone, sex, age, place of residence, clinical symptoms as well as the number of hospitalizations. K-means clustering was used to identify two maximally different groups based on a quantitative variable, such as the number of psycho- active substances taken together with mephedrone and the number of clinical symptoms. Non-parametric equivalents of the statistical tests were used in the case of non-equinumerous groups. Spearman correlation, Cramer correlation coefficient, and chi-square test were used in the statistical analysis.

Discussion of the results

Based on an analysis of the first phase of our study, we confirmed that the most common clinical symptoms associated with mephedrone use were: irritability, mood swings, convulsive seizures, anxiety, sweating, chills and tinnitus. The severity of the above symptoms is statistically significantly correlated with the dose taken. When analyzing the second phase of our study, we found that in most cases, mephedrone is used together with alcohol, then cannabinoids. As a rule, such combinations increase the risk of developing insomnia and chronic fatigue syndrome. Also, we found that the simultaneous use of mephedrone with benzodiazepines very often causes seizures, and the symptoms of simultaneous overdose of these substances can lead to self-harm. If opiates are used in conjunction with mephedrone, it significantly increases the risk of affective and anxiety disorders.

Over the past eight years there has been a significant increase in the number of people who have attempted suicide while using mephedrone. In our analyzed group of 601 people who used mephedrone on a regular basis, a large proportion had committed self-harm on their bodies. Similar results also apply to other psychoactive substances. For example, numerous studies show that there is a significant correlation between alcohol consumption and depression. Frequent symptoms of depression in alcohol addiction are, among others, suicide attempts and self-harm. The factor that increases the risk of self-harm and suicide attempts in the studied group of people proved to be combining mephedrone with other psychoactive substances. The more psychoactive sub- stances are taken along with mephedrone, the risk of self- harm and suicide attempt increases. Our blog has described several cases of fatal mephedrone intoxication. However, the earliest case of fatal intoxication is the case described by Dickson in 2010, where a mephedrone user combined the substance with heroin. It is very important to educate the scientific and educational community about combining mephedrone with other psychoactive substances. The isolated casuistic cases of lethal combinations of mephedrone have developed over time into statistically legitimate multiple cases, of which hundreds have been described.

According to the data obtained, the percentage of hospitalizations for acute mephedrone intoxication is 22.5% of cases (from a sample of 601 people). Winstock and Bossert obtained similar results in their studies. The same is true for other drugs, such as cocaine or heroin. Thus, the risk of another hospital admission increases with each act of use, or with each mephedrone session. These data also correlate with the frequency of attempted suicide or self-harm. It is believed that increased consumption of mephedrone, and thus an increase in the frequency of hospitalization, is related to changes that have taken place in the ecstasy market, the quality of which has deteriorated significantly. In addition to quality, an important aspect is the economic component. Due to the fact that there has been a significant increase in the price of cocaine for various reasons, this has also led to an increased demand for mephedrone. And the last factor that can affect the frequency of hospitalizations is the increasing speed and stress of daily life.

Summing up and conclusions

In addition, the amount of psychoactive substances in combination with mephedrone also contributes somewhat to the rate of psychiatric hospitalizations. First of all, this applies to alcohol, benzodiazepines, and alcohol. Numerous such studies demonstrate the ever-increasing problem of combining mephedrone with other psychoactive substances. For this reason, a large number of hospitalizations occur, forcing the state to spend large sums of money on treating such patients, although prevention would take a much smaller monetary outlay. In conclusion, it can be noted that the frequency of hospitalization of patients who are mephedrone intoxicated is rapidly increasing every year. First of all, this is due to the combination of mephedrone with other substances. The scientific community should launch a big campaign with regard to drawing attention to this problem in order to conduct prevention in time and prevent the growth of the serious problem of mephedrone abuse.