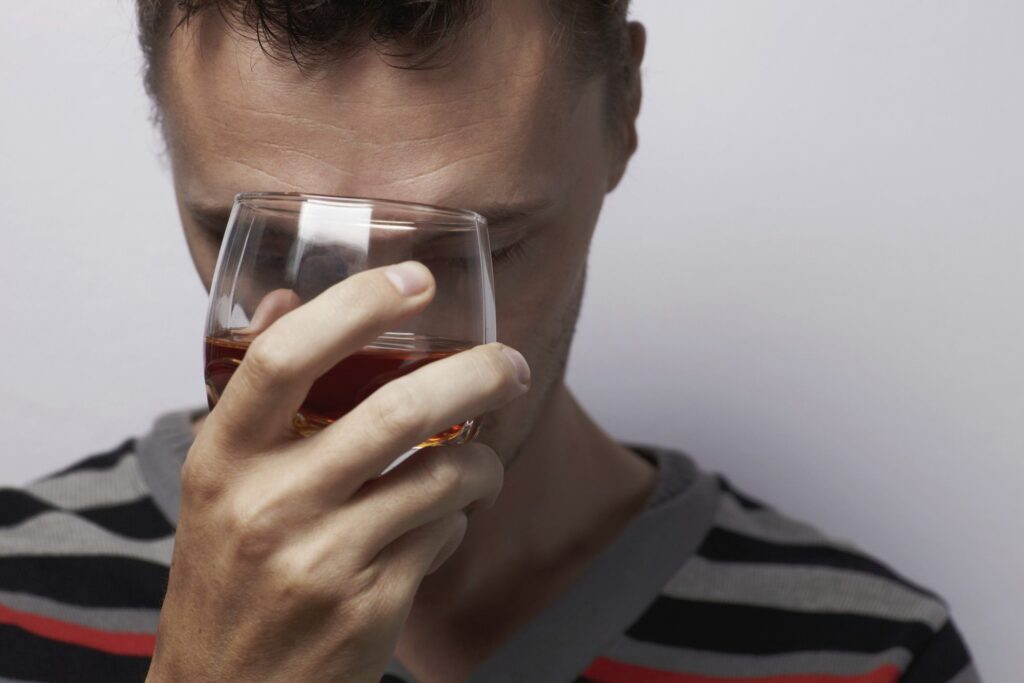 Over the past decade, a variety of new psychoactive compounds have increasingly appeared on the illicit market and darknet. The ease of acquisition coupled with relatively low prices, high purity, and popularization through social media have contributed greatly to mephedrone’s presence on the drug scene. Of the seven hundred identified NPS, synthetic cathinones make up the second largest group, according to the EMCDDA and ACMD. 4mmc is also a drug that is used heavily with multiple episodes of repeated use, often in combination with other substances. The most common combination is mephedrone and alcohol (especially at nightclubs, music festivals, rave parties, and so on). In such settings, users will report using this combination to enhance its effects. According to the EMCDDA, about 18% of acute intoxication cases are related to the combined use of mephedrone and alcohol.

Given that the potential risks of co-administration of alcohol with cathinones are extremely high, we feel it is important to highlight the very limited experimental data on alcohol and mephedrone interactions in humans. Studies in animal models that address the effects caused by co-administration of these substances have shown that alcohol enhances the stimulating and rewarding effects of mephedrone according to Ciudad-Roberts. Recent studies have identified that alcohol increases locomotor activity when mephedrone is co-administered, and in combination with 5-HT agonists, can cause neurocognitive impairment and increase the risk of complications (including acute intoxication). The main purpose of this publication is to tell the public about the findings of the study, which evaluated the subjective, cardiovascular and hormonal effects, as well as pharmacokinetics after the combined use of mephedrone and alcohol.

The experiment involved 12 healthy men with an average age of 28 years who had a history of mephedrone use at least twice during the year and had also combined cathinones with alcohol at least twice in their lives and had no drug dependence (except for nicotine dependence). Immediately prior to the experiment, volunteers underwent a general medical examination, which included laboratory blood and urine tests, ECG, and questionnaires. Also, the men were phenotypically extensive CYP2D2 metabolizers (to avoid the possibility of acute intoxication associated with carrying the corresponding PM allelic variants of the above enzyme).

The men took 200 mg of mephedrone together with 0.8 g/kg of alcohol. The mephedrone was provided by the Spanish Ministry of Justice and Ministry of Health and was packaged in opaque white gelatin capsules. Acute alcohol intoxication was induced by drinking a drink containing vodka, which was diluted in lemon-flavored water (to mask the placebo drink). Physiological parameters were measured to the following extent: non-invasive systolic blood pressure (SBP), diastolic blood pressure (DBP), heart rate (HR), and oral temperature (T), ECG, pupillary diameter, Maddox wing measure.

Attached to this publication are tables (1,2,3) that illustrate a summary of physiological and subjective effects that demonstrate at least one statistical difference in ANOVA and multiple comparison post-hoc analyses. Also included are T-C points that demonstrate a difference in the ANOVA and post-hoc multiple comparison test. The T-C points (differences from baseline) for the most significant physiological, psychomotor, and subjective effects are shown in Figures 1 and 2, respectively. Table 3 presents the pharmacokinetic parameters of mephedrone and alcohol in relation to time, as well as the effects of all substances on plasma cortisol levels.

When interpreting the results obtained in the study of physiological effects, in both cases (in combination with alcohol and with isolated use of mephedrone) an increase in the following parameters was found: SBP, DBP, HR, and PD. However, the most significant difference was the increase in HR. Thus, when alcohol was combined with mephedrone, there was an increase in HR by 40 beats per minute after 0.75 h. For the remaining physiological variables (SBP, DBP, T, and PD), only significant differences in several T-C points were observed between the combination and mephedrone conditions (no AUC or peak effects). When comparing the combination with alcohol, the isolated effects of mephedrone were significantly lower than those of alcohol alone, as could be determined from the large difference in measures such as SBP, DBP, HR and DP.

Based on Maddox-wing device values, the substance combination case resulted in an increased degree of esophoria compared to placebo (when examining peak effect rates and AUC). Esophoria induced by the combination was almost two to three times lower compared with mephedrone, and significant differences were observed only at a few peak T-C points. Isolated alcohol use only slightly increased exophoria.

From the subjective effects, which can be seen in the tables in Appendix 1, an increase in the expression of all the scales (VAS, ARCI, and VESSPA-SEE) relative to placebo was found. In the case of the combination of substances the results show significant changes in «high,» «stimulated,» «any effect,» «good effects,» «liking,» «content,» and also in «change in distances and different, changed or unreal body feeling. In general, if we compare the isolated use of mephedrone and its combination with alcohol, in the first case this condition produced lower and shorter duration scores with statistically significant differences at several T-C points. And, obviously, significant differences were found in the estimates of the level of intoxication between such parameters as AUC, peak, Tmax and T-C).

Consumption of the equivalent of 4-6 alcoholic beverages in combination with mephedrone results in a decreased feeling of intoxication and a reduced sedative effect. Mephedrone mitigates the effects caused by alcohol. Overall, the combination of mephedrone and alcohol slightly delays the peak effects and enhances the maximal effects, which remain high and unchanged in overall duration. As shown in the tables, cardiovascular and subjective effects after co-administration begin in 0.25-5 hours and peak by about 0.75 hours, then return to pre-dose values within a few hours.

Regarding the biological variability of the subjects, regardless of the above parameters, each showed adequate pharmacological effects with respect to pharmacokinetics, and the short half-life of mephedrone and the time of maximum concentration after the combination of substances explains the pattern of mephedrone-alcohol binge drinking among recreational users. 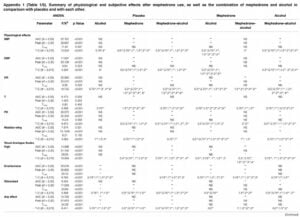 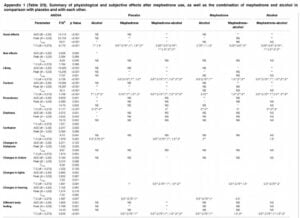 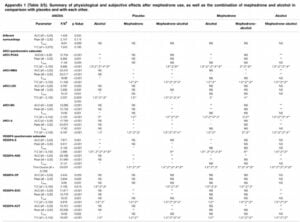 In conclusion, the combination of alcohol and mephedrone greatly enhances the cardiovascular effects and produces a more intense and prolonged sense of euphoria and well-being compared to the isolated use of mephedrone. Also, mephedrone strongly reduces the feelings of intoxication and sedation caused by alcohol. These effects contribute to the stimulation of consuming large amounts of mephedrone and alcohol, exposing the recreational user to an increased risk of toxic effects, which can undoubtedly lead to acute intoxication and even death. Thus, the results presented demonstrate the importance of self-administration and absolute control of the act of use in the drug scene, as well as the importance of adhering to the principles of isolated use and strict dosage compliance in order to prevent acute mephedrone toxicity.